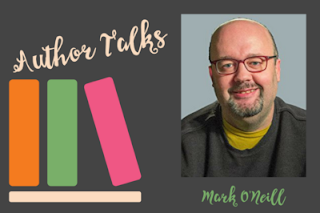 Check out this awesome interview with Mark. O'Neill!

Tell me a little bit about yourself:

My name is Mark O'Neill, I am 43 years old, married, and originally from Edinburgh, Scotland. I am now living in Würzburg, Germany and have been here since 2001, with my wife Monika and our dog Schlumpf. As well as a novelist, I am also a freelance writer for hire and work for various international clients.

What first inspired you to start writing?

I have been writing since I knew how to pick up a pen and start writing. I have always lived inside my imagination. I was that kind of child. Shy, withdrawn, and day-dreaming. What inspired me to start writing my current fiction series, Department 89, was author Mark Dawson and his writing groups.

Are you a plotter or a pantser?

An absolute, unapologetic pantser. Plotting is, for me, something that spoils all the fun of writing. Being a pantser, you never know what is coming next and that is the fun of the whole thing. Yes it makes writing a book more difficult but for me, that is just something I have to accept being a pantser. Writing this way, my books have gone off in weird tangents that I don't think would have happened otherwise.

Are your characters based off real people or did they all come entirely from your imagination?

As I said, I was inspired by author Mark Dawson and he writes a British spy series with a character called John Milton. I realised I could write something similar, but since I am here in Germany, I would change it to a German spy series, a fictional top secret department called Department 89 (think Mission Impossible - deniable if caught, that sort of thing). I would also flip it so instead of a macho male spy (who needs another one of THOSE?), I would make the lead spy character a female agent instead. I have had women calling themselves feminists thanking me for the character, as well as others saying it is a refreshing change seeing German spies saving the world for once, instead of the CIA or MI6 all the time.

What book have you read that has most influenced your life and writing?

THAT'S a tough question because I have been reading longer than I have been writing, and read about 50-ish books a year. Fiction-wise, I guess, it would be people like Daniel Silva, Mark Dawson, Robert Ludlum, Ian Fleming, Clive Cussler, Jack Higgins, Steve Berry, and John Connolly. I am also a diehard fan of the Sherlock Holmes books and I re-read them at least once a year.

Tell us a little about your plans for the future. Where do you see yourself as a writer in five years?

Writing more spy thrillers, hopefully getting them translated into multiple languages, getting the audiobooks done, and starting some new series. Hopefully a crime series.

Of all the characters you have created, which is your favorite and why?

In Department 89, it has to be Wolfgang Schmitz, the second-in-command. He never takes life seriously, tells bad jokes, likes to wear nice clothes (which are always wrecked in every book!), so he comes across as a bit of an idiot sometimes. But when the shit hits the fan, you can be guaranteed he will be there by your side and you can depend on him with your life. I like to think that describes me perfectly.

Any website or resources that have been helpful to you as a writer?

Mark Dawson's SPF - https://selfpublishingformula.com/
Jane Friedman, whom I admire enormously. https://www.janefriedman.com/
Joanna Penn (an indie writer whom I hope to have the same success someday) https://www.thecreativepenn.com/

What do you love most about the writing process?

The unpredictability of it all. Not knowing where the story is going next.
Doing something I know I'm good at.
Creating new characters and new worlds.

If you could spend time as a character from your book whom would it be? And what would you do during that day?

Wolfgang Schmitz. What would I do? Try on nice designer suits and tell bad jokes.

What are some tips you can give other aspiring writers?

Never give up. If you get a rejection, say "their loss, not mine", toss it in the trash, and keep writing. Don't ignore your fans either. If someone writes to you, write back.

What are you working on now?

The next Department 89 book. The working title is "The Avenging Angel". Provisional release date is the end of May.

Can you share an excerpt with us from one of your novels/projects?

Your readers can download the first book for free here - https://dl.bookfunnel.com/f8shufljpv

Mark is a 40-something Scotsman, now living the expatriate lifestyle in Würzburg, Germany. He has been writing in one form or another for the past 30 years. However, he is now an independently published fiction writer, currently working on the Department 89 espionage novels starring the female spy Captain Sophie Decker, protecting the German state.
The first D89 book, "The Renegade Spy" was downloaded more than 4,000 times in the first 4 weeks. Plots have been outlined for up to 20 Department 89 novels.The first book, "The Renegade Spy" has received rave reviews, with one reviewer comparing Sophie Decker to the female version of Bruce Willis's character, John McClaine, in the Die Hard movies. However, Decker scoffs at such comparisons, as she thinks she can easily beat McClaine in a hand-wrestle. You can visit Mark at his website and sign up for his mailing list at https://www.markoneill.org
Author Links:
Facebook | Twitter | Instagram | Pinterest
at April 30, 2018