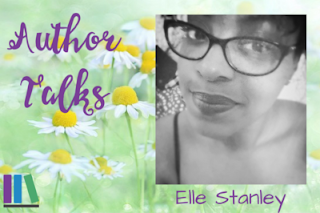 Check out today's Author Talks with the wonderful Elle Stanley! She has some really great tips for other aspiring authors too! Be sure to check her author links out!


Tell me a little bit about yourself:
I am an introvert who cares about the world, even though it hasn’t cared about me. Being a twenty-five-year-old black female, certain things in life are not instantly attainable, but I love spending my time and energy getting the things I need. I needed to be an author and, thankfully, after a lot of hard work and patience, it happened. I love reading, writing and learning and always have been fascinated by words and detail, especially since the death of my mother when I was nine. Tragedy turned into reflection and I went on to graduate in 2014 with a bachelor’s degree in English Language and Literature and then stumbled into three publishing jobs: a history publisher, a physics publisher (where I currently still work) and the fiction publisher who published my first book (who I do some freelance editing work for). Other than that, my life is pretty average.

What first inspired you to start writing?
My mother’s death and J.K. Rowling. For Harry Potter fans, the connection is obvious. My mum used to read The Philosopher’s Stone and The Chamber of Secrets to me and my little brother before bed. After her passing in 2003, my sister and I kept reading and I came to realise all of the things I hope Rowling intended: death shouldn’t be feared and love is everything. Oh, and writing is awesome! So I started reading a lot, taking out the maximum amount of books at the library every week, writing poetry and plays and some really bad fan fiction until I decided to write serious stories about people in challenging scenarios: people with disabilities, ethnic minorities, the rich, the poor and so on. Then I wrote a small science fiction screenplay that led to my first novel.

Are you a plotter or a pantser?
A bit of both. I know my characters, but I wrote the majority of 2051 not knowing how it would end. I think there is joy in letting your characters decide, in a way. Real people have no idea what will happen next week so I kind of let my fictional people live the same experience until I get an epiphany.

Are your characters based off real people or did they all come entirely from your imagination?
Each character has a little bit of me in there. They’re all a little bit human. One character suffers from depression, another is strong-willed yet sensitive, another can be really rude, another looks similar to me. They are mainly personalities and, physically and mentally, they sometimes change in my head. Places have made more of an impression in my work: Stroud, a lovely countryside district in the Cotswolds, a boarding school I worked at, London, etc., which can all be found in my book.

What book have you read that has most influenced your life and writing?
To save this from being too Harry Potter-oriented, I’m going to say Wuthering Heights. The first time I read it, I hated it. But after reading it six more times (I studied it when I was 16), I realised it was probably one of the best things I’d ever come across literary-wise. I realised that it’s not always about what is written on the page; what’s not written is equally as important. And if it wasn’t for pseudonyms, we wouldn’t have been able to enjoy the Brontë sisters’ work.

Tell us a little about your plans for the future. Where do you see yourself as a writer in five years?
In five years, I hope to complete my trilogy. I just want people to read my books and think ‘Wow, this is making me think a little bit.’

Of all the characters you have created, which is your favorite and why?
Her name is Dolly Mason and she is the Attorney General of England. She is my favourite because she is real. Despite being amazing at her job, ruthless and strong, she is fragile. She cries and worries and breaks down. Then she picks herself up. She is three-dimensional and not the stereotype of a strong woman. She has flaws and isn’t perfect.

Any website or resources that have been helpful to you as a writer?
The Oxford Dictionary site is literally the best (https://en.oxforddictionaries.com/). I use it at work. Kind of obsessed. And my job as an editor has been invaluable. I thought I was good with grammar but that was wrong, even after my degree. My work experience taught me that language is pretty flexible and just because you’re a native speaker, it doesn’t mean you know how to use an en dash.

What do you love most about the writing process?
The backspace button. And re-reading everything.
If you could spend time as a character from your book whom would it be? And what would you do during that day?

My characters are not in the best scenarios but, if I had to choose, it would be a character named Dr India Rissington, a woman who runs a controversial organisation that performs backstreet operations for the poor. I wouldn’t operate or anything like that, but it would be an opportunity to see things from someone else’s perspective. Either her or a character named Briscoe, a lawyer who is pretty positive 90% of the time and always cracks jokes, even in pretty terrible times.

What are some tips you can give other aspiring writers?
No one can tell you how to write. You just have to do it. Read. Write. Repeat.

What are you working on now?
I’m currently working on my second book, ‘2031’, set twenty years before the first.

Can you share an excerpt with us from one of your novels/projects?
The first few paragraphs from the prologue of 2051:

Ever since his wife died, he had wanted to replace her. Before that, even. She never lied when he wanted her to. And as a lawyer, lies were important to him. You didn’t have to mean them, they could be brief or longstanding, but, in his opinion, they were mandatory in order to retain relationships and, more importantly, uphold a narrative or rhetoric.

In her opinion, his tie was always too blue or his shoes too dirty. The house was spotless, yet they needed to call the cleaner back again. Dinner plates were on fire or ice cold. On most days, she would be home when he arrived, and worst, she would be awake and waiting for him while their daughter slept, only to gripe and chastise when he headed straight to the study in his offensive brogues. The door closed behind him a little bit easier every time and it practically shut itself after nine years. his punishment was silence and hers was conversation.

Some candied deceit would have been welcomed, a brief kindness, pitiful intercourse or aesthetic commentary on his dress or demeanour could have meant that each torturous moment of his life could have been sweetened, although, he never knew what that was like. That was, until about a year after she left them. His first thought was, How dare you? Brilliant. Leave me to raise our teenage daughter. Perfect, perfect timing. Congratulations.

Is there anything else you would like to share with us before you go?
Without any support or encouragement, I bettered myself. With support, I became even more than I ever imagined.

L. Stanley started reading and writing at the age of nine and began writing her dystopian, science-fiction drama 2051: The Emancipated Synthetic, at the age of eighteen. She graduated with an English degree from the University of Birmingham and works in publishing. She lives in Gloucestershire with her partner, Andrew, and her cat, Sulu.

Author Links:
2051: The Emancipated Synthetic (2018) is available worldwide in ebook and in paperback in Europe on Amazon
The paperback is also available on the Ghost & Ribbon Publishing website
at August 08, 2018