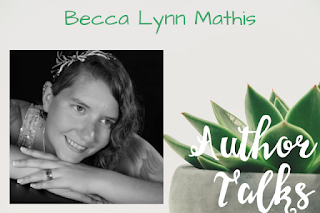 Tell me about yourself:

Well, I write paranormal fantasy. I'm a Whovian, a Browncoat, a Ravenclaw, and a Stark (though not necessarily in that order). I love fantastical stories with happy endings, and have a particular soft spot for love stories. I'm generally quite friendly and easygoing once I've had my morning Dr. Pepper, and am a total extrovert. I am quick to try new things and love to go on adventures!

I remember writing stories about unicorns when I was in elementary school. In high school, I actually got in trouble for writing in class even when my schoolwork was done and I was participating in class discussions. At that time, I was working on a sword and sorcery fantasy novel that I have since shelved. I hope to return to it after my Trials of the Blood series.

My current book came to me via an unrelenting muse one day in August 2011. That day, she made me sit and write a solid 10k words until the initial (garbage) draft was out. I then shelved it and let it roll around in my head for a while, occasionally picking it up to work a little on rewriting it before eventually getting distracted by some shiny object or another and ignoring it again. This year, I picked it up once again and have decided that it's time for it to be complete and out in the world! No more shiny distractions!

Where is your favorite writing spot?

I write most often at my computer in the front room of my house. It isn't my favorite though. I love to write in places where there are a lot of people. I find it easier to write interactions when I can watch interactions happen. So it's not a specific spot, really, but just an atmosphere that I like. When I write at home, I have the family to compete with, so I usually put on my headphones and listen to music without lyrics.

Tell us a little about your plans for the future. Where do you see yourself as a writer in five years?

Hopefully, in five years, I will be publishing the fifth book in my Trials of the Blood series with the profits and proceeds from book four. I hope to be going to lots of writer conferences and other conventions where I can meet fans of my work. I don't need to be a bestseller; I just want people to have access to these stories. One day, someone is going to come up to me and tell me that I am their favorite author. The thought of that gives me chills and is what keeps me writing.

What literary world would you love to visit for a day?

I think I'd really like to visit Harry Dresden's Chicago, have a steak sandwich with him at MacAnally's pub, and meet all of his friends (including his very good boy, Mouse). If I could con him into it, I'd love for him to show me around his quarters in Mab's place too. I love the thought of magic in the real world and kind of have a crush on Mr. Dresden.

Who is your favorite character you've created and why?

Wow, this is hard for me. It's like picking your favorite child, but worse. I think I'm going to have to go with Alexis though. She's the main character of book six of my series. She's based off a character that I played in an RPG. She is so much like me, but has such a heartbreaking story that got her to the start of her novel, and is living in heartbreaking circumstances. She has so much power (she can manipulate fire and heat at will, can teleport at will, and can see the heat signatures of people within a city block of her), but all of that power can't save the love of her life from the cycle that keeps each reality separate from one another and his memory of her existence locked away.

If you could meet any character for a day who would it be?

Any character at all? Jareth, the Goblin King of the Labyrinth. Probably my first (and forever) "bad boy" crush.

Any website or resources that have been helpful to you as a writer?

Honestly, the writing community of Twitter is a SHINING BEACON of support and awesomeness on the internet.

Beyond that, Chuck Wendig's blog post "25 Things I Want to Say to So-Called 'Aspiring' Writers" (http://terribleminds.com/ramble/2012/02/21/25-things-i-want-to-say-to-so-called-aspiring-writers/) is the super helpful kick in the pants that I need while simultaneously reminding me why I'm writing in the first place. I also look to his "How to Push Past the Bullshit and Write That Goddamn Novel" (http://terribleminds.com/ramble/2013/02/20/how-to-push-past-the-bullshit-and-write-that-goddamn-novel-a-very-simple-no-fuckery-writing-plan-to-get-shit-done/) post to remind myself that a tiny daily word count goal is probably smarter than a once-a-week word binge for writing.

I also have found that having the Emotion Thesaurus and the Emotional Wound Thesaurus to be fantastic resources to have on hand. Honestly, I would recommend keeping that entire series of resources by Angela Ackerman and Becca Puglisi closeby when writing.

Finally, I found this simple app called Writometer (http://writeometer.guavabot.com/) that I absolutely love. It has been tremendously helpful with reminding me to write daily and allowing me to track my word count. I can set a daily word count goal, or I can tell it my target final word count & finish date and it will then calculate how many words I need to write each day to achieve it.

What would you say is the easiest aspect of writing?

The ideas. The thought of the story itself and how the characters move through it. Knowing it in your head and in your heart is SO MUCH EASIER than putting it into words. But the words are how we share these beautiful stories and images, so they are necessary.

Do your novels carry a message?

There is not any intended message to any of my novels, but I suppose you could find one if you looked. I think a theme that is likely to be a recurring one is the philosophy that no man is an island unto himself. We all need people to get through life. Even the most introverted of us still look to find a meaningful connection with another person. So while I don't necessarily write with that thought in mind, it's probably pretty easy to find that theme throughout all of my stories.

Have any new writers grasped your interest recently?

I am rooting hard for many of my writer friends on Twitter (particularly A.C. Huntley, Mike Headley, Joshua Mason, Tiffany Easterling, and Kristell Redding).

When it comes to some less-new-to-the-game-but-new-to-me writers, I recently found that I am just a squishy fangirl for Jim Butcher. I also have Joseph Brassey's books on my TBR pile and look forward to reading them next.

Do you have any tips for other writers?

JUST FINISH IT! Let the first draft suck if it needs to, but finish it. You cannot edit the blank page. If you hit a scene that you just can't make work, write down relevant details for that scene and move on to the next. You can fix skipped scenes in the revision process (and it may turn out you didn't even need that scene in the end).

Before you go, can you leave us with an excerpt?

The doorbell rang right as Sheppard reached the door. He opened it wide and I could smell the newcomer – a tall, skinny blonde young man in wire frame glasses and army fatigues. He smelled earthy, yet cold.
“First Sergeant Langley,” Sheppard smiled. “Good morning.” I was sure his smile was a ploy.
Langley didn’t return Sheppard’s greeting. “Five days ago,” he said, “we lost the signal of the consanguinea’s phone out on the reserve. We picked it up again this morning, here, in a new device.”
I stood from my seat and stepped over into the living room. Ian and Jamie’s game paused, Jonathan appeared at the top of the stairs, and the back door to the house opened and closed.
Sheppard’s smile didn’t falter. “Of course, she’s here.” He gestured over to me.
Langley’s icy blue eyes met mine and I saw his nostrils flare and his chest expand. He was smelling me. He was a wolf! “She’s been turned,” he said.
I took a step closer to Sheppard.
“She was attacked on the reserve five days ago,” Sheppard said flatly, the smile fading. I sensed a tension in him and raised my chin, not taking my eyes off First Sergeant Langley.
“She’s ours then,” Langley replied, holding his hand out to me. I narrowed my eyes.
Sheppard laughed. “My pack is not yours, pup.”
Langley dropped his hand. “You would name her pack before you even know if she’ll survive the full moon?” His tone was incredulous.
“She was pack before you ever knew her name,” Sheppard countered. “Your commanding officer knew what he was doing when he came to me about the consanguinea in my territory. He knew who I was then, and he knows who I am now. I and mine do not fall under your jurisdiction, Langley, you would do well to remember it.”
Langley broke into a feral smile. “Let her choose,” he said, gesturing to me.
Sheppard’s hand clenched into a fist and his jaw tensed. I stepped closer to him, positioning myself behind his left shoulder.
Langley met my gaze again. “You would be stronger with us than you could ever be with them,” he said. “Your talents will be wasted here. We would ensure you reached your full potential and would ensure you did not lack anything you needed.”
“Talents?” I asked.
“Consanguinea wolves are cut from different cloth, Ms. Cartwright,” he explained, pushing his glasses up on his nose. “If you survive your first change, you will need help and guidance with the power that being of the blood will grant you.”


“Of the blood is the literal translation of consanguinea,” Sheppard said over his shoulder. “The latin term is the more formal title, and – frankly – rolls off the tongue better.” He turned to me. “His choice is a ruse. They will take you to Rome, to the Vatican, and no one you have ever met will ever see you again,” he said. “They will turn you into a weapon while you figure out for yourself what it means to be a wolf.” His voice softened, “They will only ever value you for what you can do for them, and though you would undoubtedly do great things – you would never be more than their weapon.”

Becca Lynn Mathis has been writing since she was a little girl, and could often be found sitting among the branches of the tree in her front yard, reading a book. Today, she is a graduate student of counseling psychology at Lynn University in Boca Raton, FL. On weekends, she plays Dungeons & Dragons (or Pathfinder) and trains with the Royal Chessmen stage combat troupe, who perform at renaissance festivals and pirate faires all across Florida.