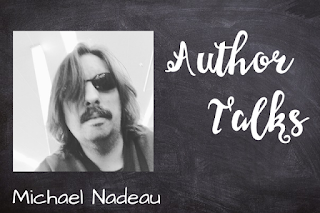 I'm a 47 year old father of three (And one grandson) and just getting into writing these past few years. I've read hundreds of novels in the fantasy/ science fiction genre and have been making up short stories for friends for years.

I think I'm a little original in that I write how I like to read. A lot of the books I've read tend to prattle on with pages and pages of description on things that the reader doesn't really need. So when I set out to write I kept it short and sweet, letting the reader fill in what they want and giving little things here and there to fill in. I also tend to start every book from the Antagonist's view, letting the reader know what the heroes will be facing way before its revealed to them.

I'm actually in a great little family with Kyanite Publishing. We all keep each other focused and help each other with Beta reads and even samples here and there.

How do you select the names of your characters?

Since I've role-played (Dungeons & Dragons) for most of my adult life, I have a storehouse of character names to pull from. That being said, elven names are the most fun I ever have in naming. They have to flow, like a river down a hill, and seem alien to most folk. Allrian'dryll Silversong is a good example that I just made up off the top of my head

Do you hide any secrets in your books that only a few people will find?

Not secrets per se, but I do have a couple of shout out Easter eggs to other authors. One example is in book three I do a flash back in the antagonists life and we learn that the other Incarnations have unique names in that time period. They have names like Time, Death, Fate etc.... This is a reference to Piers Anthony's Incarnation series and is one of my favorite series

What was your hardest scene to write?

The hardest part to write was the ending. I knew when I started the books ho it was going to end and along the way the story evolved on its own, yet the ending loomed over my shoulder like a building storm. I knew that someone was going to die, yet who was left up in the air. After all great triumph can't come without sacrifice. So in the end I wrote the scene that almost broke my own heart. I didn't cry, but it was close..

What one thing would you give up to become a better writer?

One thing....I guess it would have to be watching T.V. As much as I love to relax and watch my shows, If it meant that I could be in with some of the greats like Simon R. Green, Piers Anthony, and Ed Greenwood then I would do it.

What is your favorite childhood book?

Childhood?  Well I didn't start really reading until highschool (thank the Gods above for my Fantasy teacher) but I would have to say that comic books were the closest thing I had. I loved me some Batman and Spiderman comics

I just want to say that if you have a dream or even just an inkling to try something, don't let fear of failing stand in your way. You never know what you can do until you try!

Born in the usual way, I started roleplaying Dungeons and Dragons at the age of 8. I stopped playing it for awhile but soon plunged back into this world of fantasy and magic once more. I discovered a world of imagination and loved  the myriad of possibilities that it offered. For years I designed worlds and cities, even races, and just as quickly I brought them tumbling down in ruin. I could create pantheons of Gods, and heroes to battle against their evil plots. I also started reading avidly, thanks to a teacher in high school, and this opened up more worlds for me to peruse and dissect for my own purposes. For the last 30+ years I have been coming up with whole functioning societies......but what was next?
Well I was already writing short bio's for characters in our game, and elaborate back stories for interesting people that we would interact with, so how was that very different than writing a book? So in 2011 I started putting my brain to use on developing a new world, except this time I would have to fill in everything. Lythinall was born. I published The Darkness Returns (A Lythinall Novel) Book 1 in June 2017, and The Darkness Within (A Lythinall Novel) Book 2 in 2018. Then it happened. A publisher read my story and wanted me. In 2018 I was signed by Kyanite Publishing and will be releasing a title sometime in 2019. Other than all of this I still play the game that started it all, and I still design places, people and items when I'm not hanging out with my family or working my ass off at my day job