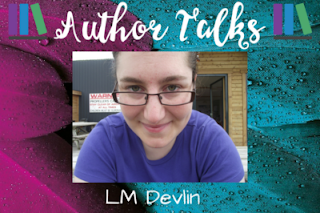 I'm eager to introduce to you all the lovely LM Devlin! Be sure to check out her interview, and if you would like to connect with this amazing author, her media links are listed below!
What first inspired you to start writing?

I always loved reading, but it's wasn't until I got into creative writing at school that I started writing in earnest. I loved being able to create new worlds and explore my inner feelings in a way where there would be no judgement.
Are you a plotter or a pantser?
I think I'm a plantser! Honestly, I do a bit of both. I always have an overall plan for my books and short stories. However, I don't get down into the nitty-gritty of exactly what happens in every chapter. Sometimes I surprise myself with what I end up writing!
Are your characters based off real people or did they all come entirely from your imagination?
I tend to avoid basing characters on other people as I think that could be disrespectful. Also potentially dangerous if someone reads it and discovers what you've done! A lot of my characters are based on facets of myself. For example, my main character Emmy has low self-confidence. This comes directly from me. Another character Zecha feels like he doesn't fit in with the role expected of him in society. Again, this comes from me.
What book have you read that has most influenced your life and writing?
I think it has to be Maya Angelou's autobiographical works. I found so much inspiration in how she kept going despite all the harshness in her life, and then how she became such a vital figure in her later life. I also love her poetry. I'm not sure if she influences my writing except in that I've realised the best writing comes from your own truth.
Tell us a little about your plans for the future. Where do you see yourself as a writer in five years?
Hopefully in five years I will have finished the Darkwitch Trilogy and will have moved on to some of my other standalone novels. I'd like to be more well-known and, if I'm being honest, I'd love to have landed a traditional publishing deal.
Of all the characters you have created, which is your favorite and why?
My favourite character is Rel, the magician Bomsoi's assistant. She's brave, honest, caring, a great warrior and also an effective healer. She's struggled with fitting into her society and ran away because of discrimination. But through it all she has kept a good heart.
Any website or resources that have been helpful to you as a writer?
Attending writing groups and residential has definitely been the most helpful resource. The act of writing outside of your comfort zone or your big project is very helpful. I've produced a huge amount of poetry as a result.
What do you love most about the writing process?
I love re-reading my work and thinking, "You know, this is pretty good!" I'm a huge self-doubter and when I came give myself genuine crept for something, it feels great!
If you could spend time as a character from your book whom would it be? And what would you do during that day?
I think I would be Zecha. While he has his issues and problems, he is so unendingly positive. I can be so negative. I'd love to feel that positive and happy for a day!
What are some tips you can give other aspiring writers?
I know this is what everyone says but it's the most important thing: write. Write your novel. Write short stories. Write poetry and drama. Write in different genres. Write stuff that you know is bad. Write stuff you think is good. Write in a journal. Free-write. It really is the best thing you can do.
What are you working on now?
I'm working on the sequel to Rise of the Darkwitch. It's called Darkwitch Unchained and it follows on exactly from where Rise ended. I'm onto the third draft of the manuscript (I think). I'm just about to start a major overhaul!
Can you share an excerpt with us from one of your novels/projects?
Here's a little excerpt from Unchained:
He watched. He waited. Soon, they would be in his sight.
It was the same every time he did this. Pausing, he wiped the sweat from his brow. Then he renewed the strength of his grip.
The sword came from his first kill in his new life—a captain. Killing was nothing new. In his past, he’d killed kings. But that was behind him. That life, that family, was nothing but dust on the wind.
Mantos pressed the leather hilt into the palm of his left hand. It was smooth. With his right hand, he gripped the bough of the tall tree. The sensation was the opposite: gnarled under his fingertips. Around him, leaves rustled, kissing the back of his neck.
Below, his prey came into view.
He’d done this a hundred times. Perhaps two hundred, three even. I have to, Mantos thought. I have to do something for these poor folk.
Every time, the dance was the same. Letting go of the branch and drawing his hood low, sword still in hand, Mantos prepared to strike.
Is there anything else you would like to share with us before you go?
Thank you so much for taking the time to read this interview! Feel free to connect with me across my social media accounts. I love a good chat!
Blog: zivgray.blog
Facebook: Facebook.com/Zivgray
Twitter: @ZivGray
Tumblr: Zivgray.tumblr.com
Insta: @ZivGray

About the Author:
Born in Belfast on the seventy-fifth anniversary of the sinking of the Titanic, Ziv Gray writes for inclusion.
Passionate about issues of mental health and LGBTQA+ rights and representation, Ziv seeks to highlight social issues - but can't resist the allure of sci-fi and fantasy.
Ziv lives in Northern Ireland with husband Barry, daughter Alexis, rescue Lurcher Andromeda, and their two guinea pigs.
at August 02, 2018