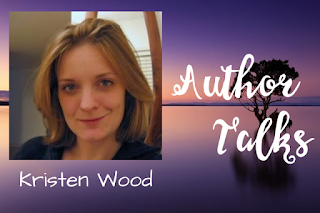 I am so excited to introduce to you all author Kristen Wood! Be sure to check out her interview below and connect with her on her social media!

I’m a mother of two little girls, a runner, and a freelance writer. I’ve published five novels in a young adult fantasy series named Ærenden (pronounced Air-uhn-den and spelled Aerenden for Google searching). Currently, I’m mapping out another fantasy novel that takes place within the same realm as Ærenden, though it’s not part of the series, and I’m writing a short story companion book for Ærenden and a 4-book adult romance series. I’m a Mainer by heart and a D.C. area denizen by address.

What five things do you do to prepare yourself to start writing?

Grab a cup of coffee, shut off my wireless, slip on a pair of headphones, queue up music or a white noise station, and find a spot to get focused (depending on my mood, this could be my office at home or a coffee shop)

Do your characters seem to hijack the story or do you feel like you have the reigns of the story?
Both. There are some things I refuse to let my characters hijack, certain plot points I need to hit to keep the story going, but sometimes it’s best if I get out of their way. For my fantasy series, a fan favorite main character was plotted for only one chapter of the first book. He refused to leave, and he changed the entire trajectory of the series---for the better. I learned early not to argue with him.

I don’t think the two are mutually exclusive. Without originality, readers get bored, but without meeting their expectations, they get annoyed or confused. A fantasy novel that leans too heavily on romance and not enough on fantastical elements would be a disappointment for everyone. But the same novel without originality doesn’t give anyone a reason to flip the pages (nor does it give me much drive to write). So I guess the short answer is I try to strike an equal balance between the two.

My author friend list runs in the dozens, so I’m going to avoid making people fall asleep by mentioning them all (nor do I want to leave anyone out, so I’ll avoid names entirely)! My friends critique my work, help me find new avenues to explore (“hey, have you thought about trying…”), and keep me abreast of grammar and field changes (“did you see the new comma preferences in X published work?” “have you tried this new marketing site?”). They also keep me from being too introverted by chatting me when I disappear for a while, provide great sounding boards when I’m stuck, and they allow me to see their work from draft to finished, which teaches me their editing and world-building techniques. I learn as much by giving to the writing community as I do from having them help me.

Don’t worry. Every author thinks their writing is insufficient. Keep trying, keep writing. Every word on the page will make you a better writer, and every year will create better stories than the year before.

Getting the dialogue to sound natural. Fortunately, I have my husband to let me know when I’ve gone astray there.

Tell us about your writing style, how is it different from other writers?

This is a fantastic question. I’ve never read two authors with the same voice or style, so I feel as if every writer is completely different from another. Where I may differ from some writers in my genre is my complex themes. Interspersed among the battle scenes and romance, jokes and monsters, I ask important questions of my characters and my readers, about how perspective shapes our interpretation of the world and each other, how it creates and fosters prejudice, and how it impacts our vision of ourselves. For those who don’t want a more serious fantasy, these components are not “in your face,” but for those who like books to help them think and grow, they are present. I also scatter little keys throughout the series that often don’t become obvious until a second read through. I don’t like simple books, so I tend not to write them.

Have you ever written a character with an actor in mind?

No, and in fact, I have trouble naming actors that would play my characters in a movie or TV show. They have such distinct personalities that it’s hard to picture them with a different face than the one in my mind.

Which literary character do you most resonate with on a personal level?

Hermione Granger. I was always the loyal book nerd in school, so I felt a lot like I was reading about my high school years with her (less the magic part lol).

Can you share an excerpt from one of your novels/projects?

The following comes from The Shadow Guard, the fifth and final book in the Ærenden series. Miles, May (Nick’s mother), Neiszhe, and Cal are all Elders, rulers over a special army of magical protectors known as Guardians. Emma is May’s apprentice; both women are magical Healers.

“A Zeiihbuan?” Cal asked. “Are you certain?”

“Of course I’m certain,” Nick snapped. Cal raised an eyebrow in warning, but Nick refused to offer an apology. He had no patience for the Elders’ usual protracted discussions and debates. Two hours had passed since Meaghan’s kidnapping. Miles had made him repeat what had happened three times before going to get the other Elders, and now Nick had been forced to share his story again.

Cal rubbed a hand through his beard. “You realize what this means, don’t you?”

Miles nodded. Neiszhe blanched and sat down on the couch.

Nick lost what little tolerance he had managed up to this point. “It means Meaghan was kidnapped. Now let’s start working our resources to see where he took her. We should have done that immediately. We’re wasting time.”

Nick’s attention snapped to his mother. Ass was strictly an Earth term. Nick had taught it to her, and now she had used it against him. He could not decide if he felt angry or impressed.

“Keep quiet. You’ve said enough already,” she ordered and crossed the room to the terrace doors. She had healed one of Meaghan’s Guardians, and now supervised the second Guardian’s healing. Emma kept her head low as she worked. Her hands shook, and Nick did not know if the nervous reaction stemmed from overhearing his conversation with the Elders or having his mother scrutinize her.

When Emma had finished, May patted her on the shoulder. “Nice work. Take our patients down to the infirmary, please.”

Emma scurried from the room, the two Guardians in tow. May crossed her arms over her chest and faced Nick. “I’ve given you too much leeway up to this point, allowing you to wallow in self-pity. I won’t put up with it any longer.”

Nick stared at her. His cheeks burned with embarrassment.

“I understand that you’ve been through a lot over the last year. I understand your frustration and your fear, but you have to understand the repercussions of what you’re saying. And you need to start acting like a king. Ærenden’s welfare matters most, even above Meaghan’s.”

“I’m only stating facts,” he argued, though he recognized the lie in his words. His love for Meaghan had always blinded him. His mother glared at him, and he glanced away from her scorn. Voices bounced around the room, echoing wordlessly in his ears. He had sunk to the bottom of the ocean. He could not breathe or hear anything beyond the whoosh of the current as it carried him farther from shore. He had to try to swim back. Duty came first, no matter how much he loathed it.

Thank you for joining me, and a huge THANK YOU to Rebecca Cahill for letting me visit today!

Kristen spent her childhood at the feet of an Irish storytelling grandfather, learning to blend fact with fiction and imagination with reality. She lived within the realms of the tales that captivated her, breathing life into characters and crafting stories even before she could read. Those stories have since turned into over a hundred poems, short stories, and nine manuscripts in both the Young Adult and Adult genres. Currently, Kristen is writing from various coffee shops and public spaces in the suburbs of Washington D.C.