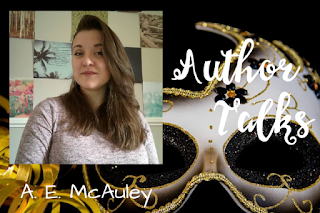 Today's interview is with A. E. McAuley!

I’m a fantasy writer who travels with my military husband and two dogs. I was writing as a hobby in online communities for about ten years before I decided to sit down and put out a book I intended to publish. In 2016 I finished my first novel, “Flightless” and have been working on building my platform, sending out my finished draft to agents, and writing my second novel ever since.

Are you a morning writer, afternoon writer, or an evening writer? Does the time of day you write impact your writing?

I’m definitely an evening writer, although I could argue I’m a very early morning writer. Once ten hits, I usually get a burst of energy to work on my novel, and can stay up from one to four, depending on how it’s going. It’s hell on my sleep schedule, that’s for sure, so I do wish I wrote more in the morning.

Is writing your full-time profession? If not, what else do you do and how do you manage both jobs?

I only recently decided to stay at home and work solely on my writing career, and really, I find that I was writing more when I had a job. When I was working almost full time, the hours I got to write were precious, and I could stick to a strict schedule. Now, I have all the time in the world and I’ve really had to crack down on my self-discipline. But for people who are looking for how to both work and write, I swear by daily schedules. If you know you need to write for an hour, set aside that hour and hold yourself accountable however you can.

Why is research so important for writing?

I’ve always felt like research grounds the story in reality. When an author isn’t well researched on the topic they’re writing about, chances are their readers are going to notice. To me, research is like filling in the pot holes of a road. Sure you may know how to get from point A to point B, but if you’re missing the basic structure of your world building or character creation, it’s going to be a bumpy ride.

What is the craziest thing you’ve had to research?

Oh wow, I’ve had so many wild researching adventures. I think the two craziest experiences were when I went to research other people’s lifestyles to make sure I was accurately portraying their culture. I spent about a week driving back and forth to a Hindu temple in the Texas Hill country, and then a couple of hours a month talking to a Wiccan priestess, and I learned so much. It wasn’t the typical “crazy research” I normally do for my books, but it was wild in that it opened my eyes to the way other people live.

How do you create the world you are writing in?

Lots and lots of notes. I scribble down everything that looks like it could apply to my world and then come back later and piece it all together. That and I am especially a fan of looking at human psychology. How humans respond to events in our world can be used to create realistic depictions of how people handle problems in the world I create. This can be done on a large or small scale from natural disasters, to dictators taking over a country, to even parents getting a divorce and kids having to deal with the fall out. Psychology has been a life saver in my creative writing.

What steps do you take in drafting an outline?

Usually I do a stream of consciousness plot to see where I want the story to go, then I break it down in to scenes or chapters and take it one step at a time. This lets me work out any crazy ideas I may want to use, but don’t work in the grand scheme of things. Once my book is done, I usually do another chapter by chapter break down, just to look at things on a smaller scale to see where there are any holes in the plot.

I try to write stories that I would want to read, or that apply to a lesson I needed to learn in my life. If I’m taking joy in my work, it makes me hope my readers will, too.

I was in a writing group with Alexandra Burt and Robert Ashcroft about three years ago, and their tough love helped me break down my walls and learn how to take criticism. With how much time we were spending together, they were able to pin point what my standard for “good writing” was, and then hold me to it when I was below par but also encourage me to get better. It was hard, but they were constantly putting me back on my feet, dusting me off and telling me to get back in the saddle. I needed that when I first started out.

To not be so scared. I was always worried I was going to offend people close to me by writing about themes they disagreed with that I hid most of my work from the world, and only shared it in private echo chambers on the internet. I was terrified that my writing would make my family upset, that I kept it to myself till my husband encouraged me to stop worrying so much about what they thought because it was holding me back from my passion.

Can you share an excerpt from one of your novels/projects?

Sure! I’d love to share an opening to a warm up that turned into an entire passion project. I’ve been obsessed with old magic in a new world lately, and after working with an artist to have them do some character sketches, I fell in love with an old warlock named Colvus. Hope you enjoy the first few paragraphs!

The girls in the corner booth weren’t witches, however much they pretended to be. Despite the tarot cards tossed across the table, thick makeup, and edgy tshirts declaring "moon child" or "witch bitch", they were as human as they came. If they had even an ounce of magic in them, they would’ve felt the warlock watching them.

Colvus missed the good old days, back when using magic meant whispers in the dark and coming from a magical bloodline actually meant something. Now, every normal human with a grandmother who smoked peyote 60’s was a self-proclaimed “hereditary witch”. But, oh no, they wouldn’t cause anyone harm, or use their magic for “evil”. They were good magic users.

It made him sick.

He gulped his black coffee to feel something other than anger, ignoring the burn down his throat as he watched the girls giggle over tarot cards spread across the table. It was a disgrace. If they did that when he was their age, they would’ve been burned alive. Their whole families would’ve! Nowadays, they could act however they wanted with their pretty pewter pentacles and fake crystal rings. It was a free country, and the worse thing that would happen to them would be a couple of dirty looks.

“They really should be careful.” The voice of his familiar cut into his thoughts. “We should teach them a lesson.”

Colvus put his lips to the cup again, hiding his murmur. “Not right now.”

He almost forgot the spirit was there. It was an easy thing to do, the creature had been with him since he first touched magic over ninety years ago. The weight of him on his shoulders was almost nonexistent after carrying him for so long, even as uncomfortable as it was. Tiny talons dug into his shoulders as the salamander-like spirit leaned over to lick the rim of the cup still poised in the air.

Of course he was no fun. He was the voice of reason; the spirit was invisible and had no consequences.

The fake witches let out another shrill burst of giggles, each high pitch laugh a knife between his ears.

Disgusting, he thought with a grimace. They are laughing on the graves of great men and women, playing at witchcraft without knowing anything about the power they were trying to tap into.
Colvus hoped they got burned by it.

Anything else you would like to say before you go?

If you’re interested in my future projects, feel free to check out my blog, or find me on Twitter! I’m still getting the hang of social media, but I’d love to hear from people.